Betrayal of Trust, his first novel, was published in 2012. Built around suspenseful plot elements, romance and complex characters, Betrayal of Trust will leave readers wanting more. Weaving research and factual information into his organic writing style, Wright brings a unique, intriguing story to the public. 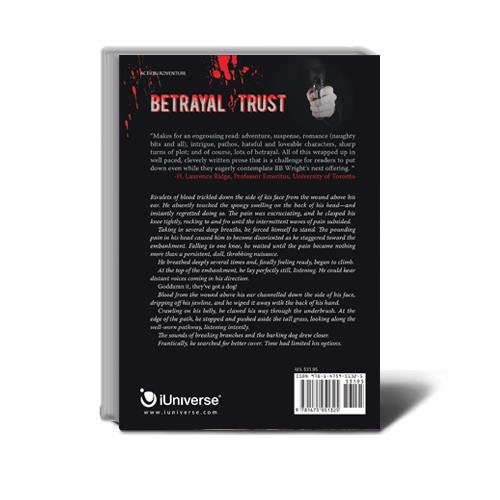 You can purchase this novel from the following online retailers:

The novel Angel Maker will be published in the Fall of 2020.  The following is the plot summary:

The gruesome murder of a young child, Rebecca Grynberg, pushes Inspector Alexander Collier into a treacherous investigation – and places his own family in jeopardy. Propelled into a world of spies, espionage, and a series of seemingly unconnected murders, he soon learns that the lives of his son, his son’s fiancée, and her Jewish family in Nazi Germany all hang in the balance because of his involvement. Reluctantly, knowing they are the only people who can help him, he joins forces with an unlikely group: a psychic medium, a British agent with a prosthetic leg she calls ‘Cuthbert,’ and a NKVD Soviet agent.

Set on the eve of World War II, Angel Maker  takes you on a heart-pounding journey from the shores of Bournemouth, England, across the English Channel to France, and into the heart of Nazi Germany. Prepare for an edge-of-the-seat thrill ride full of suspense, revenge, romance – naughty bits and all – and plenty of sharp turns as Inspector Collier races to bring a killer to justice.

His third novel, Sunnyvale, the sequel to Betrayal of Trust, is expected to be released in 2022.

The plot summary for Sunnyvale:

A rural community is turned upside down with the influx of extremists bent on creating a white ethno-state, the murder of a highly respected police officer, and the fetishism of a person willing to kill to keep his secret. The Mayor and Chief of Police go to great lengths to hide the skeleton in their closet while putting together a team to combat the destructive forces in the community.