Four hours he had made her practice! Four goddamn hours! Until she defiantly screamed out: “Papa! I don’t want to be a ballerina! I will never be one! Do you hear? Never!”  Stomping her foot, she crossed her arms tightly across her chest and purposely took on a belligerent stance.

The room flooded with anger so palpable it almost smothered her with its intensity. Attempting to flee ahead of him, she lost as he caught her in mid-flight and began to shake and hit her.

Too absorbed in protecting her head and getting free, Angelina barely heard him.

Her father stayed with her and kept repeating his truth; a dogma that snapped at the air like the gnashing teeth of a vicious, rabid dog.

“I promised her! You have no choice!” he yelled over and over again as he struck her.

Words—those repetitive words—that carried their own special truth on a steel cold blade struck through his anger and hit its mark and she hung limply in his grasp daring him to strike her again.

His anger melted away as quickly as it exploded and he let go of her.

As she fell to the floor she was determined not to allow—not even for a second—her eyes to leave his. Her mind screamed: You must win! No matter the cost!

Towering over her, she saw only bewilderment and shame bubbling up in his eyes.

He looked away. Then, gesturing to her teacher, Katrina, who at first backed away, he sighed deeply before ushering her toward the open door.

The only tangible effect discerned from her pleas was that her father’s shoulders sagged noticeably just before he closed the door behind him.

She threw her ballerina slippers across the room; they ricocheted off the mirrored wall onto the floor like badly formed dog excrement on a park pathway at twilight.

Tears streamed down Angelina’s cheeks as she massaged the ball of one foot then another as she sat on the floor in that over-sized room.

She looked back at the closed door and shrugged as she wiped away her tears. Standing, she ripped off her tutu and broke into raucous laughter. Kicking up her legs in the style of dancers at the Moulin Rouge she danced to the music that played so joyfully in her head. Every Saturday for the past six months, she sneaked out to enjoy that entertainment she discovered nestled in the vibrantly alive, creative district of Moulin Rouge.

“What are you doing, Angelina?” bellowed her father’s voice.

She stopped! Opposite her was the portrait of her late mother, the ballerina, Teresa Piorella.  Hesitating briefly, she turned to face her father.

“Papa, I cannot be her!” she exclaimed, nodding toward her mother’s portrait. “I will not be her.”

Pushing by him, she ran upstairs.

Ten minutes later she descended the stairs with a small suitcase in her hand. Taking one final look, she left.

This is my first attempt at completing a writing prompt for Write on Edge‘s Write at the Merge. The challenge was to us this Degas painting dancer and the following Ayn Rand quote about slaves and masters: 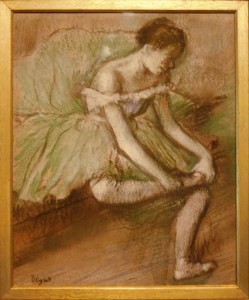 7 thoughts on “The Moment – a Write on Edge Prompt”