A Short Story by B. B. Wright

“The warm wedge of light passing through the window washes over me as I sit in its glow reading my grandfather’s diary. My back rest is an old wooden chest that he crafted before he left Latvia as a young man in search of work.

Based on the stories I’ve heard,  grandfather was only eighteen when he began this journey. Homesick, hungry and often searching for reasonably priced and suitable shelter, grandpa worked at odd jobs scant in both money and time employed for over a year until good fortune finally smiled on him and he landed a steady job in Munich.

Then, according to dad, one day everything changed for grandpa.  For some reason, dad never elaborated on what he meant by that statement.

Though, by the looks of this page, grandpa recorded that eventful day in bold lettering:

Beside it, he wrote in German: I’ve just met the most beautiful girl in the world at the Hackerhaus pub and I’m going to marry her. Her name is Emma.

Wow! I wonder what she looked like at that moment?

As I brush my index finger carefully over each letter he wrote, I hope (and I know it’s silly) to capture something of that moment. Oh how I wish I had my very own time machine! I would…Come to think of it I already have one—his diary.

Still, I would have liked to have been there at that very moment when they first met..

My grandmother’s name isn’t Emma. Who the heck was  Emma? To my recollection, my family has never mentioned her. Not even grandpa when he was alive.

Maybe the answer lies somewhere in the next pages.

Nothing?! Only blank pages?!

Several pages have been ripped out. Why would someone do that?

Let me check now…there…toward the end of his diary there are more entries. But, it’s several years after the War. The depth of detail in those pages is quite mundane and sparse compared to his earlier writing. What once was written in stylish cursive is now… weak and poorly written. Whatever happened to cause such a seismic change?

I’LL BE THERE IN FIVE, DAD.

I wonder if there’s something more in this old chest. Hmm…How did I miss these tied up old envelopes? By the looks of them, they’ve gone through some real rough times. There are some photos, a postcard and newspaper clippings in this one. Well I’ll be damned! It has the year 1938 written on it.

Let’s see…If I spill the contents on the floor and spread them out,  it should make it easier for me to see everything at a glance.

This photo looks like grandpa… sweeping up broken glass below the window of a shop? Quite a lot of damage, I wonder what happened? On the back of this photo her name appears again: Emma’s parents store-Nov. 10.

I’ll leave it here on top of the chest. Maybe dad can explain what happened.

A rush of air fluttered through the photos and news clippings to haphazardly expose some and hide others when the door to the attic was closed sharply. 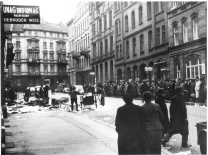 The statement “Then… one day everything changed for grandpa” had much deeper and more profound meaning than the young person could ever have imagined. Though the October 10 date written in the diary was eventful it was not the “change” the father meant.

The pictures and news clippings begin to give the clue.

Who was Emma you may ask? She was the grandfather’s first love whom he lost one month after they met during a very dark time in history.